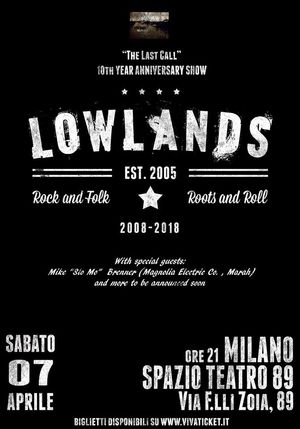 On april 7th, 2018, ten years after releasing their Debut Record and 14 years since forming, Lowlands decided to stop recording and touring as a band with a sold out show in Milan's Spazio Teatro 89.

Once described by  Uk Magazine R2 as “one of Europe’s finest roots rock bands”,  Lowlands played as far and wide as possible: from Galway to Stockholm, from London to Rome. Playing bars, clubs, theatres, pavements, markets, squares, jails and even a church and a  castle too.

They played some great venues like Whelans in Dublin, The Roisin Dubh in Galway, The Windmill in Brixton, The Railway in Southend on Sea, Folk & Rock in Malmoe, Alcatraz in Milan and their home club in Pavia: Spaziomusica.

Their sound has been compared to such diverse groups as Wilco, Whiskeytown, Soul Asylum, The Waterboys and Green On Red. “mercilessly mixing and matching roots, punk, folk and rock n roll music” (Rock Times, Germany). “Roots on the inside and grunge on the outside”, according to one French reviewer (Le Cri Du Coyote France).